After a series of cryptic hints and teasers, Overwatch has finally revealed the identity of the game’s newest playable hero. Hammond, also known as Wrecking Ball, is the 28th hero added to the game, and he’s a hamster. Yes, that’s right, a hamster.

In a short reveal clip and origin story video released on June 28th, Hammond literally rolls into the game in a giant, gun-toting mech reminiscent of a hamster ball. So, what else do we know about this mysterious but well-armed rodent?

We know that Hammond was a test subject at the Horizon Lunar Colony, the same scientific program that endowed Winston with his advanced intelligence. However, the experiment came to an end when the intelligent gorillas rebelled, killing the scientists in charge. Winston and another test subject, presumably Hammond, escaped to Earth. Hammond’s role in the uprising remains unclear. Up to this point, no indication was given that Horizon used anything but gorillas as subjects, leading many to conclude that Hammond would be a gorilla, like Winston.

Hammond’s origin story trailer reveals that he built the mech suit, which he used to escape the Lunar Colony uprising. He crash-landed in Junkertown in the Australian Outback, where it seems that he used his mech suit to fight in arena battles of some kind. This led him to fame and fortune, and is also how he acquired the “Wrecking Ball” nickname. 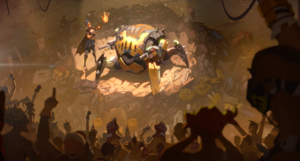 Hammond is a Tank, with his most notable ability being the ball mode showcased in the trailer. A grappling hook will allow him to swing around the map rapidly and slam down onto enemies from above. Like other tanks, Wrecking Ball has a unique shield ability that increases according to the number of enemies surrounding him, encouraging players to charge into clustered enemies and play more offensively. Finally, his ultimate is a barrage of mines that can be launched in a surrounding area, with predictably explosive results.

All these details indicate a new Tank aimed at more aggressive players, and Wrecking Ball’s inclusion in the Overwatch roster should lead to some interesting changes to how the game is played.

The 10 best free to play games ever

Best video games to play with a partner

If you liked this article then you'll love our newsletter!

Join us to receive hilarious memes, photo galleries, tips&tricks, and the best games!

3 ways to get better at Overwatch